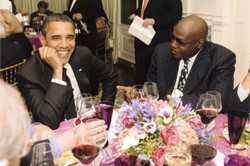 Still an aggressive advocate for small and disadvantaged business concerns, Mr. Clark acted as an advisor to the White House Task Force on Small and Disadvantaged Business during the Obama Administration, and serves on the Executive Committee of the Congressional Black Caucus Institute’s 21th Century Council.  The CBCI launched the 21st Century Council to identify issues key to ensuring a sound future for all Americans and to provide workable solutions to the White House and U.S. Congress to meet these challenges.

Check out our MLK Day Powerpoint